The Story of Diwali 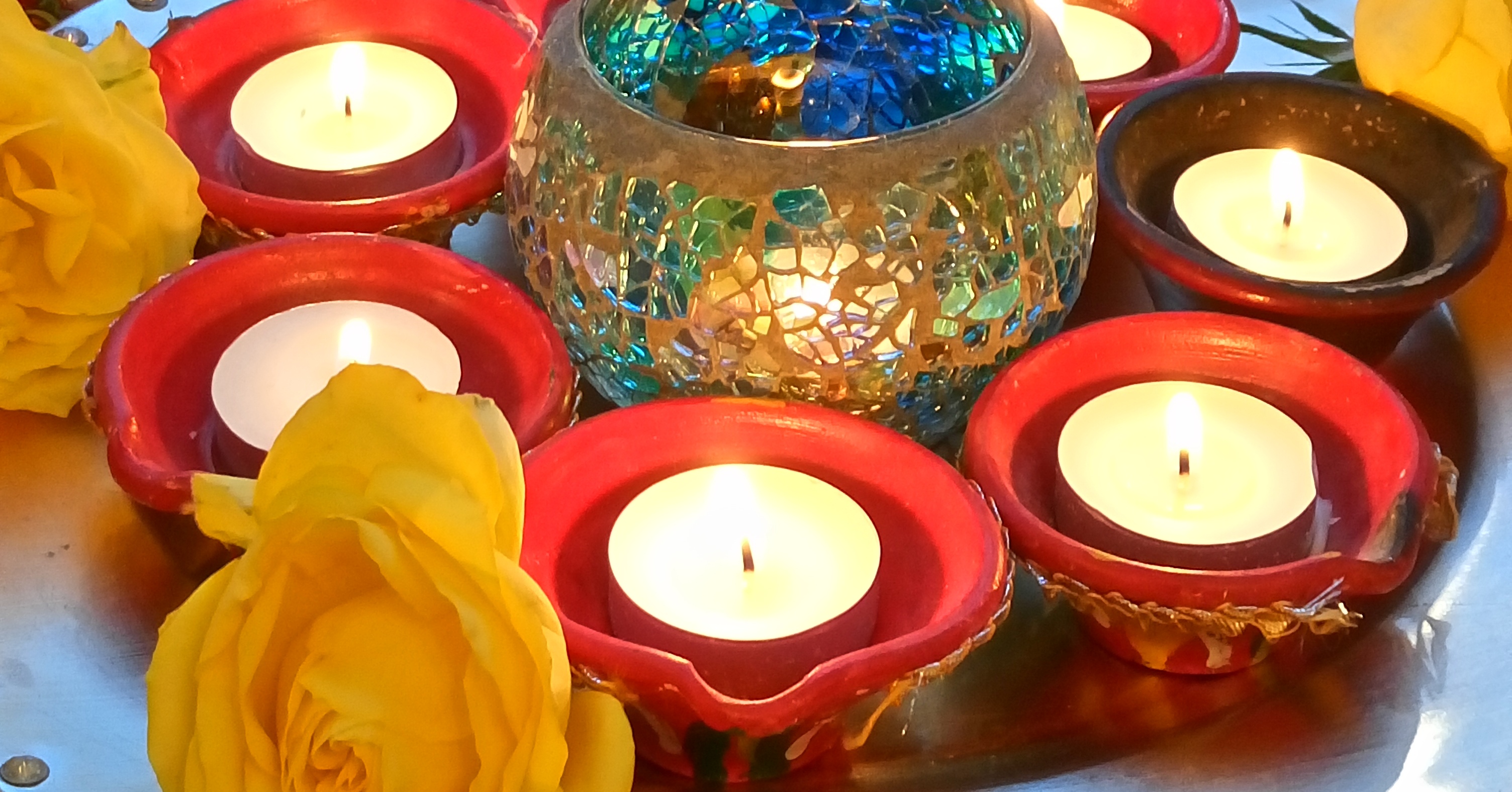 Rama grew up in Ayodhya as the eldest son of King Dashratha. He was close to his three younger brothers, especially Lakshman and the brothers grew up to be strong, handsome and devoted to their father and the people of Ayodhya.

One day, when travelling with a sage (wise-man) Vishwamitra to destroy some Rakshasas (demons), Rama went to the court of King Janaka, the father of a beautiful girl called Sita. Janaka had announced that that any king or prince that could lift a mighty bow and string it would be worthy of marriage to his beloved daughter. The King of Lanka, Ravan, had tried to bend the bow but was unable, and fled ashamed and angry. Rama effortlessly lifted and strung the bow and then broke the mighty weapon in two. King Janaka praised Rama and soon him and Sita were married and returned together to Ayodhya where the city celebrated the union.

When Rama was ready, the old King Dashratha wished to pass on his crown to his eldest son. However one of his wives, Kaikeyi, had other ideas. Corrupted with nasty thoughts by her evil maid, Kaikeyi reminded King Dashratha that he had promised to grant her two wishes. Firstly, she wished that her son Bharat would be crowned king and secondly, that Rama would be banished to the forest for fourteen years. Devasted but bound to honour his word, King Dashratha was forced to banish Rama and would crown Bharat when he returned from his travels.

Rama calmly accepted his father’s wishes and left for the forest with Sita and Lakshman, who had sworn to look after him. A heart-broken King Dashratha soon passed away without his sons close by. When Bharat returned and heard of his mother’s actions, he felt deeply ashamed and went to find Rama to beg his brother to return and take the crown. Rama refused, saying that it was his duty to fulfil his father’s promises. And so Bharat returned to Ayodhya to rule on his brother’s behalf and placed Rama’s sandals on the throne as a symbol of this, awaiting his return.

One day, a demoness called Surpanakha saw Rama in the forest and fell in love with him. She begged him to marry her but he refused her and she jealously attacked Sita. An angry Lakshman protected Sita and cut off the demonesses nose and ears as punishment. Surpanakha fled to her brother, Ravan, the King of Lanka and convinced him to destroy Rama. Ravan had not forgotten his humiliation at being refused Sita’s hand in marriage and so he agreed to kidnap Sita.

Ravan used another demon disguised as a beautiful deer to lure Rama away from Lakshman and Sita. When the deer called out to Lakshman imitating Rama’s voice, a worried Sita begged Lakshman to go and help Rama. Reluctantly Lakshman left Sita, but not before drawing line in the dirt, in front of the door to their hut. He told her not to cross the line as it would protect her while he was away. Ravan was hiding nearby and transformed himself into a poor beggar, weakly asking for food from outside. Sita, unable to see the beggar suffer, moved across the line to give some food but Ravan grabbed her and transformed back into the ten-headed demon.

Hanuman had magical powers and learnt that Sita was being kept prisoner on the Island of Lanka. It was a great distance away so Rama asked Hanuman to find exactly where she was hidden and to take his ring to her so that Sita would know that Hanuman was Rama’s ally. Hanuman took the ring and climbing up a mountain, leapt and flew across the sea to the island. He found Sita and gave her the ring, and told her that Rama would soon wage a war on Lanka and rescue Sita. Ravan caught Hanuman and punished him but he managed to escape and get back to Rama.

Rama, Lakshman and Hanuman attacked Lanka with an enormous monkey army. The monkeys made a huge bridge to the island and there was a fierce battle that lasted for several days. Eventually, Rama struck down Ravan and found Sita. To demonstrate her devotion and virtue to Rama, Sita walked through fire and was finally reunited with Rama.

Now that all the Rakshasas were destroyed, Rama, Sita and Lakshman travelled back to Ayodhya, at the end of their fourteen years of exile. They approached Ayodhya when the moon was waning, arriving at new moon. The people of Ayodhya lit diva (lamps) across the city to light their way home and were overjoyed at their return. Bharat immediately handed the throne to Rama and there were great celebrations across the land to mark his return and the triumph of good over evil.