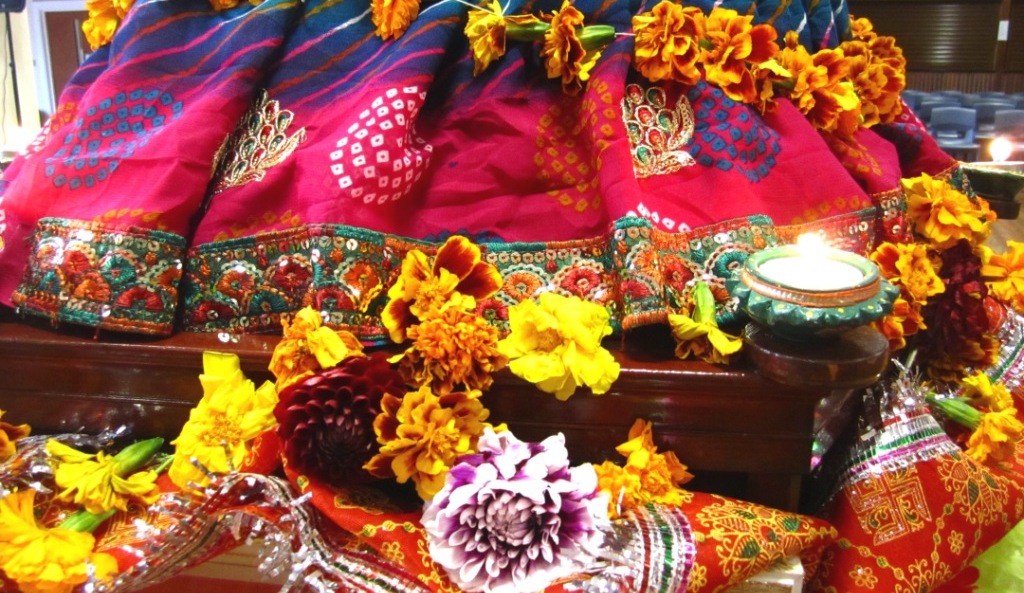 Today I wanted to tell you all about Navratri. It is my favourite Hindu festival and I’ve been dancing away for the past few nights. It’s celebrated in autumn for 9 nights with traditional folk dancing called Garba as a big part of the Gujarati celebrations.

We do a special prathna (prayer) each evening called Mataji Ni Aarti and light a diva (lamp) inside a garbo (a clay pot with holes in it). While singing the prayer, we circle the aarti ni sani (circular plate containing the diva) clockwise. We also offer prasad (some food, often fruit and a small steel pot of water) to baghwan (gods). After the aarti, we take the diva to each member of the family and round all the rooms in the house to bless them and then eat the prasad. Many people, such as my Nanima, fast for the festival, eating only one meal a day (called ek tano).

The whole community comes together each night to dance and celebrate. We wear traditional Gujarati chaniya choli’s – a flared skirt with a short blouse and a chundri (scarf) wrapped round. Our accessories include coloured bangles, necklace and earring sets, janjri (anklets) and a chandlo (bindi, a small coloured dot worn on the forehead).

In the centre of the hall there is the garbo and a shrine with pictures of the different goddesses being worshipped. It’s decorated with lots of fresh flowers and coloured chundris. The different prasad and aarti ni sani are placed around this before the dancing begins.

There are a number of different Garba dances; the most common being ‘be tari’ and ‘trun tari’ which translates as ‘two clap’ and ‘three clap’ steps. People of all ages gather in concentric circles around the garbo and dance the set steps, always moving to the right. Each piece of music can go on for about an hour; it starts on a slow tempo with perhaps a hundred people in the circles and gradually gets faster and faster until there’s just a blur of a few dancers in the centre. The band plays garba music using traditional Indian instruments such as the tabla, harmonium, dhol and manjira.

Other dances include ranjanyo (best described as a type of line dance with twisting and turning movements) and dandiya raas (a stick dance played with partners in rows). Each dance has its own basic steps and varieties of this which gradually get more complex, especially when the music gets faster! It’s such a happy feeling when you’re spinning around the dance floor and you can hear the music beating away. Everyone cheers and whoops when the tempo quickens and it’s a great test of fitness to stay right through to the end! My sister and I always have a bit of a competition to see who can stay in the longest and although we might have a few blisters by the end of the evening, it’s totally worth the thrill of it.

At the end of the evening, everyone gathers round the garbo. The diva are lit and we all sing Mataji Ni Aarti together before sharing prasad. When the whole community sings the prathna together, it’s a really special moment and this is my favourite part of the night. Singing the aarti is the calming spiritual end to an exhilarating night of dancing, ready to do it all over again the next evening.