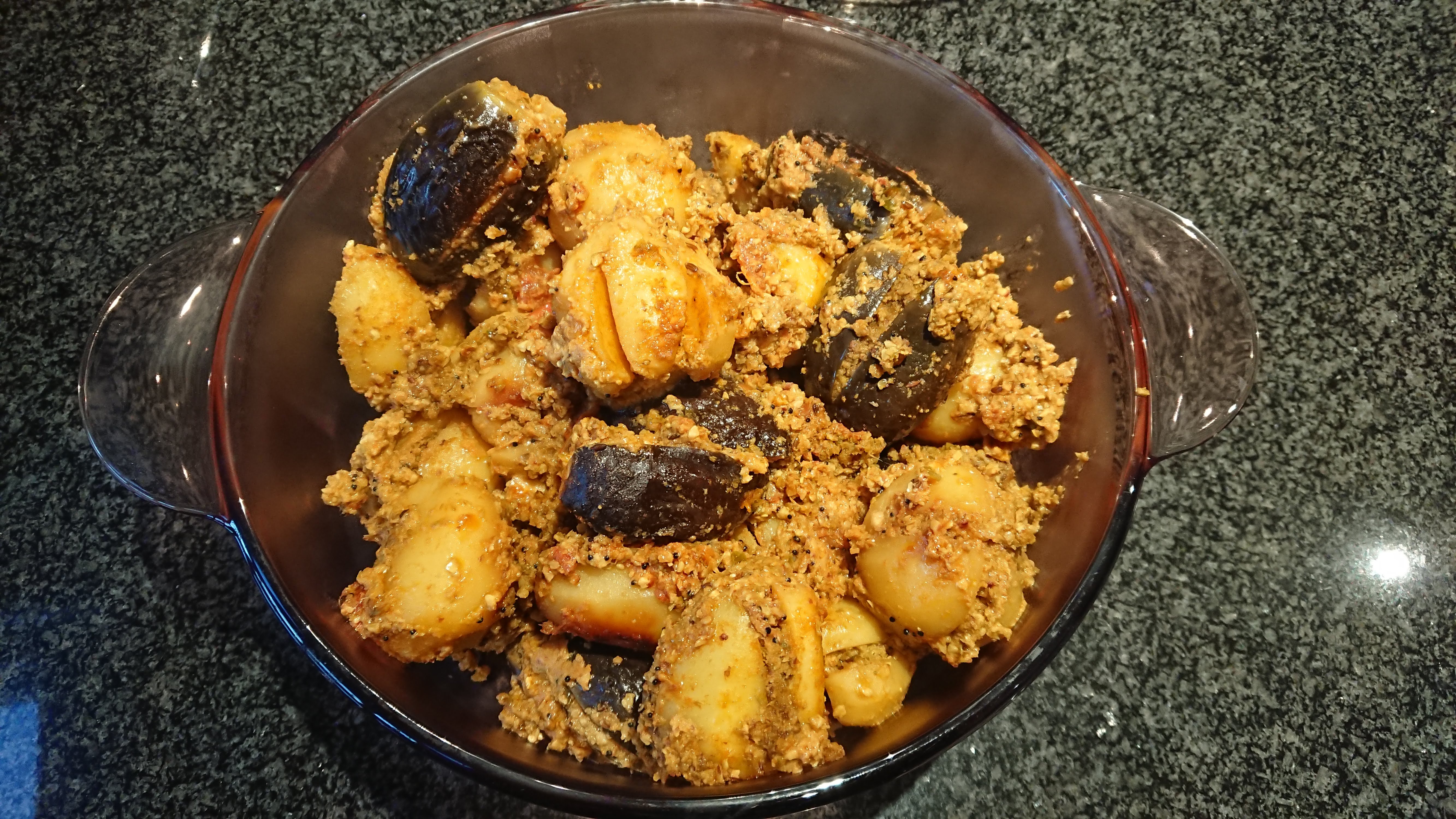 Today I’m going to share with you my all-time absolutely favourite shak; Aka Ringra Buteta Nu Shak. Yes it takes a bit of time to prepare, but boy is it delicious and nutty and full of flavour. Just thinking about it makes my mouth water… (even though I’ve literally just had some leftovers…)

We generally use small potatoes around 6-8cm long or there abouts. The baby aubergines (also known as Indian aubergines) are what we used, but the longer thinner aubergines (sometimes called Chinese or Japenese aubergines) also work well.

1. In a food processor, coarsely grind the peanuts and transfer them into a mixing bowl. Then blend dhana, garlic, ginger and chillies into a paste and mix into the peanuts

2. Add the coconut, nimak, dhana jeeru, hardar, sugar, lemon juice and thel and mix thoroughly. The texture should be similar to wet sand and the mixture should clump together if pressed. If it is too dry, then add a tbsp of water and mix in until you’ve got the right consistency

3. Put the mixture to the side and then prep the veg. Peel the potatoes, remove the stem of the aubergines and cut a deep cross into each potato and aubergine, leaving about 1cm at the bottom

4. Open up the potatoes, stuffing the mixture deep into the cross – first one way, then the other as shown in the photo below

5. Stuff all of the potatoes and aubergines in the same way and set to the side. There should be a little bit of stuffing mixture left over

6. In a large pan (or large pressure cooker if you have one), heat 2 tbsp thel on a high heat. Once hot, add in the rai. When they pop, add the jeeru and leemro. After a minute, add in the rest of the stuffing mixture, the tomatoes and salt to taste, mixing well

7. Take off the heat and add in the stuffed potatoes and aubergines, gently stirring to coat evenly in the sauce

8. Place back on a low heat until cooked through. If you’re using a pressure cooker, then cook on a medium heat until the first whistle and then turn down to low heat for around 20 minutes. Once cooked, garnish with dhana and serve with rotli

I hope you enjoy this dish as much as I do! A variation is to also stuff shallots, baby courgettes, okra – basically whichever vegetables take your fancy. As a special treat, my mum adds in a handful of cashew nuts into the sauce (only if my Papa and I haven’t already munched our way through the jar of them in the cupboard…).